This year, the 5th edition of the European Development Days (EDD) took place in Brussels on 6 and 7 December. Organized by the European Commission and the Belgian Presidency of the Council of the European Union, EDD is the leading European forum where the questions and issues about international development cooperation are debated. It brings together European institutions, international organisations, Member States, civil society, global leaders and representatives, to discuss major development issues in open and controversial exchanges, with the goal of enhancing public awareness of development cooperation issues. The event’s theme this year focused on the MDGs, health, nutrition, fragile states and the coordination with civil society – all directly in line with World Vision’s “Child Health Now” campaign priorities. 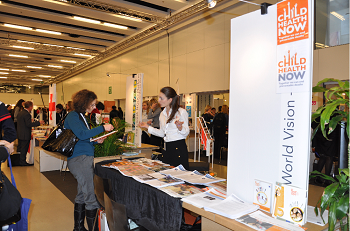 Child Health Now (CHN) is World Vision’s first global advocacy campaign. Child Health Now campaigns for governments in both developed and developing countries to meet their commitments to achieve the Millennium Development Goal 4: reduce child mortality by two-thirds. During the EDD the campaign was promoted through a stand, an exhibition featuring paintings and drawings on health done by children from counties such as India and Cambodia and an official side event which targeted policy and decision makers at EU level.

World Vision Romania (WVR) representatives took part in the EDD and participated in the promotion of the CHN campaign. Moreover, since WVR is a partner in the EU funded project "Raising Awareness in Development Cooperation" (RADC), the European event represented a real opportunity to raise awareness on WVR initiatives and activities related to the RADC project.